In 2007, Chantal Carr established Hope Arising, a nonprofit organization dedicated to delivering clean water to rural villagers in poverty-stricken Ethiopia. Several years after establishing Hope Arising, Carr was introduced to the work of The Forever Young Institute, an organization that helps nonprofit groups adopt the Arbinger principles and tools to improve their development, implementation, strategic planning, accountability, and overall results.

Because Arbinger’s work had helped other organizations in the healthcare industry, Plum turned to Arbinger to develop a leadership model, an organizational cultural framework, and front line staff tools that would enable each newly acquired facility to both integrate within Plum’s organizational culture, and empower the previously dysfunctional leadership team within each facility to turnaround a poorly performing enterprise.

“ As a result of staff at all levels doing their work in an Arbinger way, we have accomplished a 10-fold increase in the number of 5-Star rated facilities– the highest government rating for nursing homes–among facilities we acquired in the last 4 years. This result is particularly remarkable considering that before acquisition the average Star rating was below 3.”

Initially Arbinger consultants provided in-person strategic consulting and overthe-phone coaching to the executive team. They guided the development and implementation of a strategic roadmap that would enable cultural transformation during and after each facility acquisition. As a result of this initial work the executive team was able to develop policies and procedures and implement collaborative work practices that would serve as the footings of an outward mindset culture. Through ongoing coaching sessions, Arbinger worked to equip executive leaders with skills to grow and develop every facility administrator throughout the company.

Arbinger worked with Plum leaders to develop customized training programs and reinforcement aids that could be deployed at each level of the organization and which integrated Arbinger’s tools with Plum’s mission and core values. Leader specific programs and front line reminder aids were developed to help employees implement outward mindset practices in their day to day work (Figure 1). 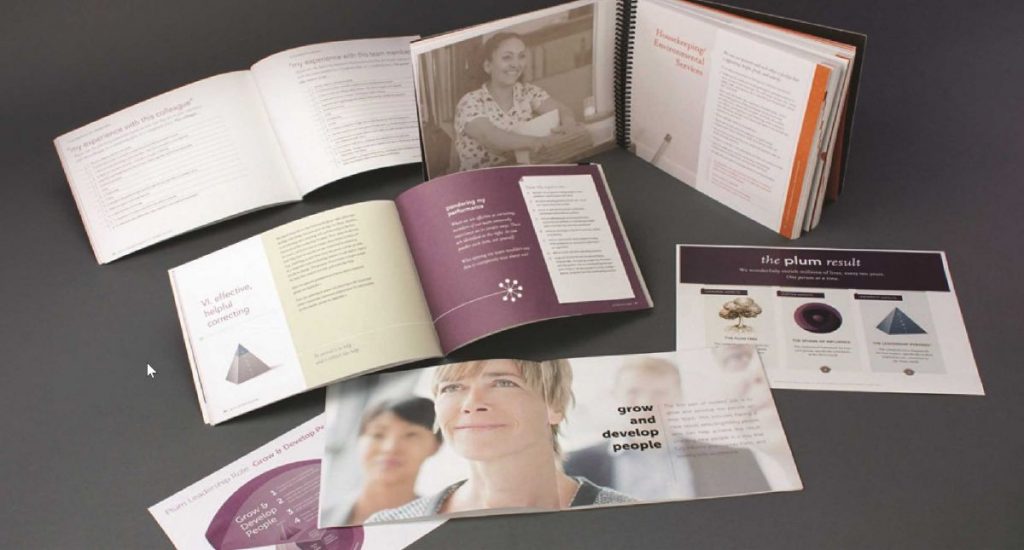 Arbinger consultants then worked alongside the executive team members to train facility administrators in Arbinger’s tools and methodologies so that each operational leader would be equipped to transform the culture, performance, and results within their respective facilities. To date, Arbinger has certified over 70 executive leaders and administrators as facilitators of Arbinger’s programs.

Through the facility administrators, Plum has systematically deployed Arbinger’s programs across the organization. Within each facilty the clinical director and department managers— who together supervise staff of 100 to 250 employees—are introduced to Arbinger’s tools and invited to lead and develop others in a way that accelerates patient outcomes. This outward leadership approach is reinforced through regular leadership training meetings for administrators, peer to peer mentoring, and ongoing discussions to sustain outward mindset ways of working for front line employees.

By implementing Arbinger’s tools across the organization, Plum has been able to grow at at remarkable rate (in the past 10 years Plum has increased the number of facilities and employees by almost 500%), while ensuring that each newly acquired facility is fully integrated within Plum’s results-focused and patient-centric culture.

In addition to other key metrics, Plum measures quality of care by the results of mandatory inspections conducted by regulatory agencies. Deficiencies in quality of care of a G or higher (G and higher defincies indicate that actual harm resulted to a patient) identified by the state agencies at all Plum facilities from 2008 to 2010 totaled 6 deficiencies, compared to an average of 29.25 deficiencies of the same severity at competitors of similar size. Additionally, acquired facilties that had been cited for significant deficiencies in quality of care outcomes uniformally achieved dramatically improved clincial results within two years of the Plum’s acquisition and implementation of Arbinger tools (Figure 2).

FIGURE 2: Regulatory deficiencies in 5 Plum facilities measured 2 years before and after Plum’s acquisition and the implementation of Arbinger’s programs

Plum Healthcare now operates 63 skilled nursing facilities and five home health and hospice agencies located in strategic geographic regions in California, Utah, and Arizona. In 2010, When Plum acquired 27 of their 63 facilities, they engaged Arbinger to help solve the many complex challenges inherent in assimilating an acquired company—including over 3,900 nurses—into Plum’s growing healthcare system.

The results of Plum’s implementation of Arbinger’s training and reinforcement tools throughout newly acquired facilities has proven remarkably positive. Results include significant improvement in both qualitative and quantitative metrics tracked. For example, as a result of these efforts, Plum’s Clinical Quality Measures improved 37% from 2011 to 2016. Federal citations at Plum facilities, a key indicator of quality of care, are 34% less than the average number of citations received by competitor companies.

The figure below demonstartes the results of the annual California Department of Health inspections regarding regulatory standards of care from nine Plum facilities. In each case, the successful application and implementation of Arbinger’s programs enabled each new acquisition to demonstarate sustantial compliance during regulatory inspections—a key indicator that Plum’s outward culture enables consistent delivery of the excellent clinical care (Figure 3). 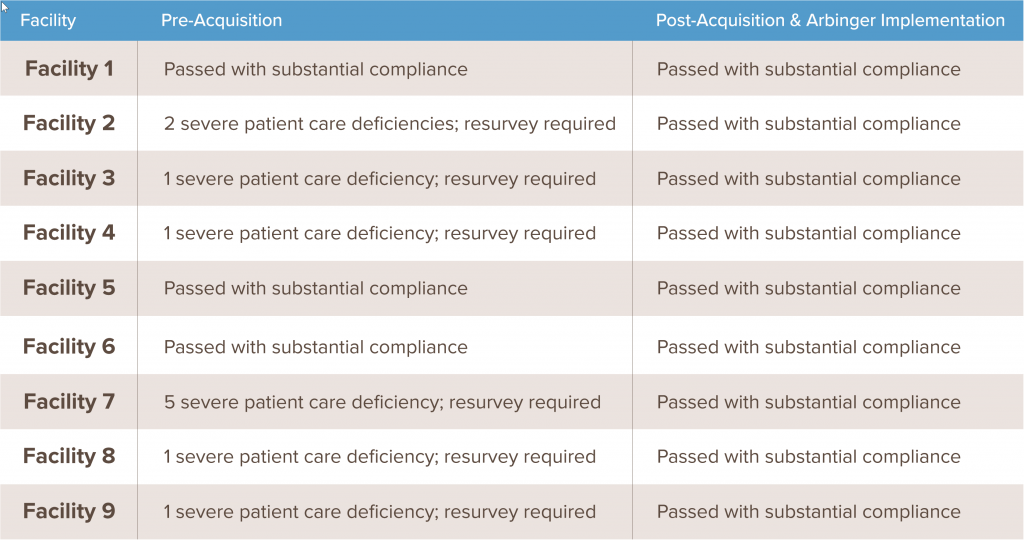